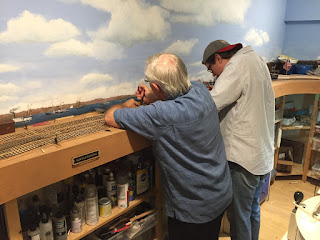 It was a steamy rainy day as reinforcements arrived on the Aquia Line to help with various tasks.

Leonard White arrived first and he went to work in trying to wire up an automated grade flashing warning light system on the PoLA layout.

Joel Salmons and his son John were next up. They went to work laying rail and spiking track at Aquia Landing. This was John's first visit and he had a great time. He even asked to come to more sessions, including learning about operations. 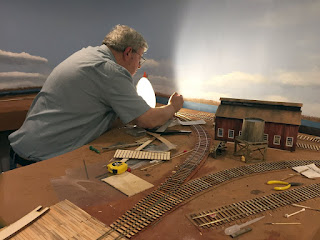 Doug Gurin arrived next and also went on spiking brigade.

While we were working, Normal and Daylene Wolf stopped by to visit. They are on a weekend trip to visit DC to see friends and take in a Nat's baseball game. They hadn't seen the layout in several years and seemed to like it. I handed them a throttle and they had a chance to run a train around for a few minutes before they had to leave. 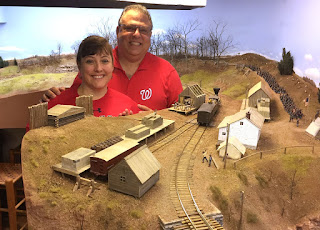 Right before dinner I glued down the ties for the new sidings at Burnside's wharf. After a great BBQ dinner where Joel and John joined Alicia and I,  I went back to work on track laying and nearly finished one turnout before calling it a day.