Yet another Aquia Track Plan Revision

I've been thinking about the track plan for the Burnside's Wharf area and I decided to make some changes. The most immediate change is to eliminate the second wharf planned to represent Burnside's Wharf.  I concluded that it was going to be too crammed in the spot I planned for it. I also want to get this part of the layout done before the ACWRRHS group arrives in September. I don't think I can get the second wharf done in time. In fact, I cut the number of tracks from two to one as I don't think I need the second track. (I can add it later once I start laying track.)

In terms of operation, I can still use the track in that area to represent trains that are destined to Burnside's Wharf. It would function like a visible staging track.

This design also makes the option of a continuous run more feasible by adding a removable track across the door to the dispatcher's office.

The second big change is at Falmouth. This would happen once I decide to remove PoLA and expand the Aquia Line. The more I live with the borax factory peninsula on PoLA, the more I realize I don't like it there. It's a little too tight for daily use. It also creates a choke point especially when I have visitors. So I took out the wye at Falmouth and reduced the bump out to only accommodate a tunable. 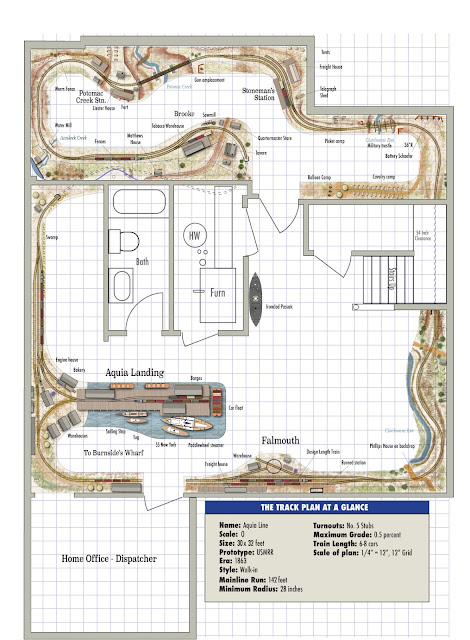 Last Friday we had a torrential rain that lasted most of the night. That caused some minor flooding in the basement. There was no damage to the layouts, furniture, or computers. But some boxes that I carelessly had placed on the floor got wet. I also had to pull stuff away from the walls to spray disinfectant. In the process I purged a lot of old stuff.  The recovery is almost done, so I'll be back to building layouts soon.