Last week I was discussing with Seth Neumann a possible design for a telegraph system for the Aquia Line. I discussed a possible telegraph system in an earlier post. The basic idea is that each conductor would report arrival and departure at each station by pushing a button at that station. The button would activate an Arduino microprocessor to create a telegraph message in the dispatcher's office telling the station and the train number using Civil War Count Code - a simplified form of railroad morse code used by the USMRR as it was easier to learn.  The Arduino would also create a text version of the OS report, in case the dispatcher missed the morse code. The dispatcher would be the only one that has to know the code.

While reporting arrival and departure, sometimes called "O-S-ing" in later TT&TO eras,  was done by the prototype Aquia Line, it is really not necessary on the model railroad, as the dispatcher doesn't have much else to do. The main purpose of this system will be to allow the dispatcher to maintain a train sheet and to create a realistic noise. The telegraph is in effect adding "audio scenery" to the layout. 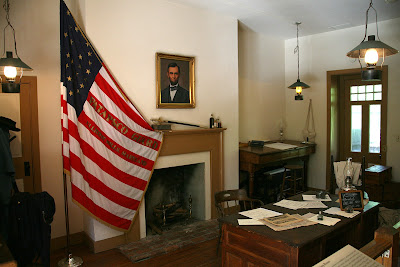 So having a dispatcher with a telegraph clattering away would be really neat, but it creates a ripple effect on other aspects of the layout especially the layout design. If I am going to have a dispatcher, then he or she needs a work space. Probably an antique style desk.  Then,  I'll need a picture of Lincoln and a period flag based on the photo of the restored station at Ellicott Mills as a guide.

Where to put the dispatcher? Probably the best place is in the home office area. Since the dispatcher will usually be me, and I need to go in  and out of the office during an op session to answer questions, fix problems etc,  I don't want to be trapped in the office with a duck under  section of layout in the way. So if I went with layout design  v19 I would need to make a gate or other section to allow access to the office.

Or, I could change the design and go to a version 20 see below. This version adds a passing siding at Potomac Creek by moving Stonemans and Falmouth into the main room, thus making 5 possible places for meets. The extra passing siding is not that critical as the train density would not change, but the extra length of run wouldn't hurt.

The blob by Robert's Ridge would make it impossible to have a couch in that part of the room. To compensate, I would move the crew lounge to the office area. But then I couldn't have too many book shelves in the office.  I could install book shelves under Falmouth and Roberts Ridge to make up fo r the loss in the office.  The aisle by Falmouth could be a problem especially with two train crews there, so I made the aisle in that area as big as possible.  In this design, I lose the expanded Burnside's wharf, in return for a longer run and easier access to the office.  However, it does keep open a possible expansion of Burnside's Wharf into the office if I run out of things to do later too.

All this just to hear some noise ripple across the layout.