This weekend is the 150 Anniversary of the 1st Battle of Bull Run. The City of Manassas is hosting a major four day event with nearly 10,000 re-enactors, 60 cannon and hundreds of horses, mules and even some oxen.
Brian Kammerer, the artist that has helped me create my backdrops with his fantastic camps scenes, will be at the reenactment displaying his civil war art work. He intends to eventually cover the whole war, but he has been working on a series of prints for the first Battle of Bull Run and they are fantastic. He also produced a series of special edition prints commemorating the 150th anniversary just for this event. Check his web site for more details. If you are at the event, please stop by and check his display. He also has a fun video for sale entitled, "The Other Great Locomotive Chase."

On his way to the event, Brian spent a night at our house, where he had a chance to see the layout, offer some artistic advice, run a train and watch his video on the big screen. It was fun to listen to his comments about the making of the video as we watched it.

He also had a chance to view the crude mock-up of the Aquia Landing area. I made a cardboard cut out depicting the hull of a Passiac Class ironclad ship. Brian's advice was to make the USS Passiac slightly smaller scale so it would fit in the available space. I am still not sure that I want to include the ironclad.  I think a series of barges and tugs would more accurately depict this as a logistics base. A small gunboat might be a better fit. On the other hand, nothing says Civil War naval action like an ironclad Monitor style ship. 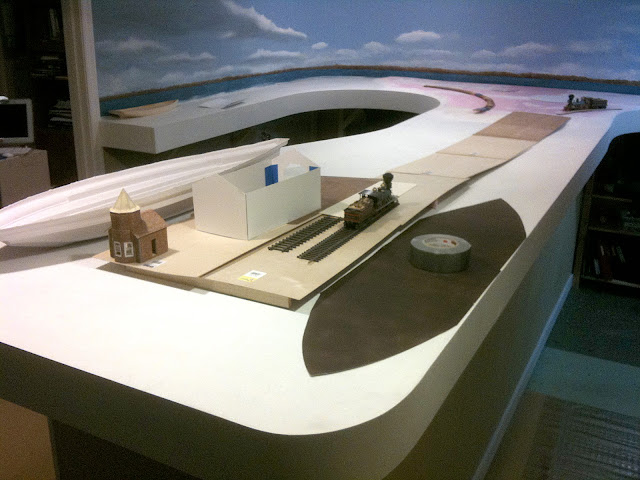 One factor I must consider is access to the tracks on the wharf to allow easy uncoupling. The Passaic, being a low slung ship, would not pose too much of problem if it were in the foreground as people reach over it to uncouple.