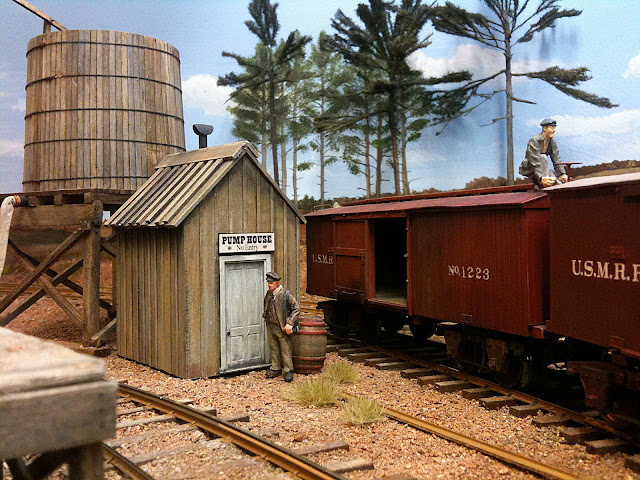 I continued working on the final details punch list for Falmouth. I resumed sculpting the climbing telegraph lineman for the pole, added some grain sacks, installed some guard rails and built a pump house. 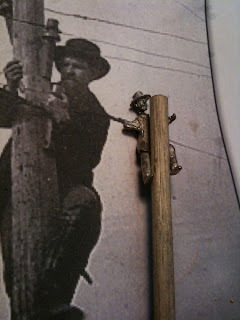 The telegraph lineman is based on the photo from the Civil War. It shows a soldier at the top of  pole doing maintenance. Actually, in the photo it looks like he is hanging on for dear life as he poses for a picture. I can't see any tools.

I cut and modified a locomotive engineer figure from Cannon Scale Models so that he looked like he was climbing the pole. These figures out of production now. I found them at a train show for a good price,

I replaced the Cannon loco engineers head, that had a typical RRer's hat, with a head from a 28mm Old Glory ACW soldier wearing a flat wide brim hat. The heads on Old Glory figures are overscale (they should be about 1/58 to 1/64th scale) and work well with 1/48 scale figures. I also converted a second figure that would be leaning on a tree watching the action.

Unfortunately, both these figures were damaged as I heated them to speed the cure of the two part modelers putty, in this case it was Andrea Sculpt. The metal in the figures actually melted. I used my hair dryer to speed the cure as suggested by the Andrea Sculpt instructions. Normally I use a small foil lined box with a single light bulb for heat. But I noticed the putty was taking a long time to cure with this arrangement, so I tried the blow dryer. Oh well.  Two little metal puddles later...


Fortunately, I have duplicates of the base figures.  So I redid the pole climber. This time around I used thick CAA to reshape the joints and Andrea Sculpt to make the jacket. This went quicker. I primed the figure and test fit him on the pole. So far, so good. Now I just need to finish painting him.


As I mix up small batches of putty, I usually have some left over. With these bits I made grain sacks. I will need several hundred of these so it might be worth my making a mold and casting them. 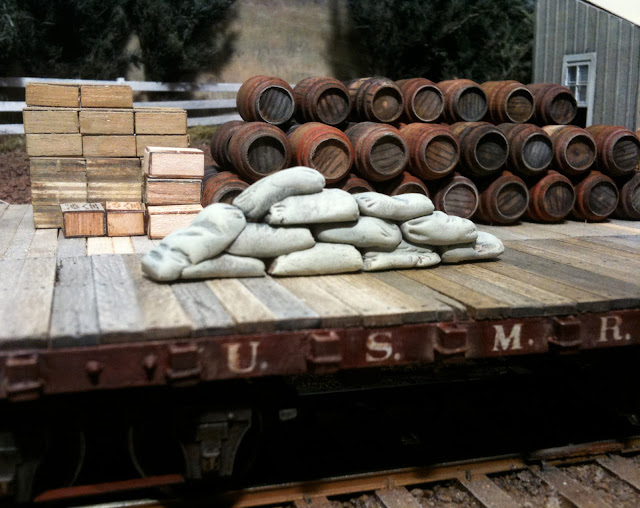 The pump house is a quick scratch build using scribed board and batten siding and scale lumber. The door is a Tichy casting. The stack is also a casting. I made a sign for the house, although I don't have a prototype to go by. It makes sense that they would have a pump for the tank. The small triangular area by the water tank looked empty, so I added the pump house. Once I decide on final placement, I'll glue it down and run a pipe to the tank.

Also visible in this shot is the guard rail I added to the turntable lead. This curve is very sharp and a guard rail helps keep the wheels on the rails. I also added  guard rails to the other sharp curves behind the tank. 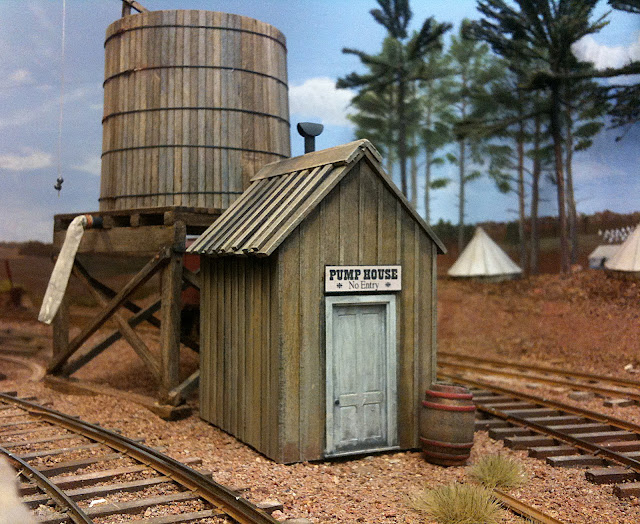