In about five weeks we will be taking McCook's Landing to Atlanta for the NMRA National convention. The layout is not quite ready, and work has been a little slow lately as I was focusing on a client model that also must be ready for the Atlanta meet. That model is now done and is on its way to the client. Here is a peek at the finished model. If you go to the Atlanta convention and go on the Chattanooga layout tour you can see this S Scale model as well as some others I have built for this client.

I had been looking at some of George Barnard's photos of Atlanta and was intrigued by two of the photos showing U.S. soldiers destroying the railroad.

These two images were taken near the same location just NW of the Western and Atlantic Railroad depot (the building with the cupola in the background).

The upper photo shows a group of U.S. Engineers (at least two soldiers and the officer have engineer castles) from XX Corps, Army of the Cumberland. One of the officers is wearing the star on his hat, the Corps Designation for XX Corps, under Henry Slocum at this point.  The XX Corps was formed by consolidating  XI and XII Corps from the Army of the Potomac, under command of Joseph Hooker. Those Corps had tough luck when fighting in Virginia and Pennsylvania, but excelled in the Atlanta Campaign. The former XI Corps commander, Howard, managed to survive disasters at Chancellorsville and Gettysburg to go on and become a very effective commander under Sherman.

I always wondered what the metal objects in the second photo were. At first glance they appear to be a steam engine. Upon closer review though, it really is a collection of parts from various items.

I annotated the image with what I think some of the pieces are. The iron bed has the inscription, "Esler & Co. Atlantic Dock, Brooklyn, NY 1856." A little google searching showed that this was an iron foundry in the Red Hook area of Brooklyn, NY that made boilers for steam boats and other uses.

My guess is that this photo shows factory equipment  that the confederates were trying to evacuate, but was abandoned on a loading dock near the tracks. The U.S. engineers in this photo are getting ready to destroy it.

One last thing, I highly recommend the website Secrets of George Barnard's Photographs of Atlanta in the Year 1864. It is a really amazing website and shows how the web can present information in an new and fascinating way. Given that current downtown Atlanta looks nothing like it did in the Civil War, this website is especially valuable. It is a must see. 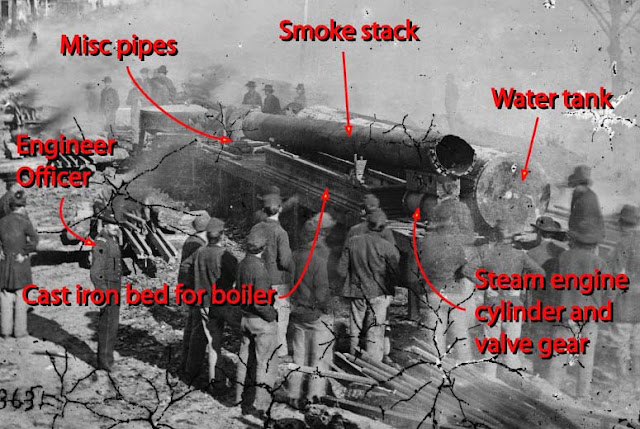