Less than one month to the NMRA National Convention in Atlanta. Work on McCook's Landing is in the final push. This week included a motley assortment of tasks from DCC programming to scratch building. Here is a brief run down.

Based on user feedback from Paul Dolkos I reprogrammed the speed curves on the S-Cab equipped Whiton with a Tsunami decoder. Using the T5000 to do the programming was fairly simple. The problem was more difficult that expected due to some inconsistencies in the user documentation between the S-Cab and the Soundtraxx decoders. Several emails to both manufactures yielded the answers I needed. I must say both have excellent customer service. I was able to program Whiton so that it not only starts smoothly, but has up to throttle 10 setting for switching speeds.  This involved reprogramming the following CVs for you DCC gurus. The rest of you can skip to the next pretty picture....


This all sounds so complicated but the Soundtraxx manual is pretty good and using the T5000 is easy to program CVs. Finding the correct values was just a matter of trial and error. I made a paper table with notes of each trial so I knew what the variables were. There is no way to read the decoder values that are on the decoder over the radio. So I found keeping track of the adjustments was helpful.

In doing some test running while programming I noted that two turnouts were causing some derailments. Sure enough, a gauge check revealed tight areas. They must have shrunk after ballasting. Some re-spiking and gauging and all was well again. 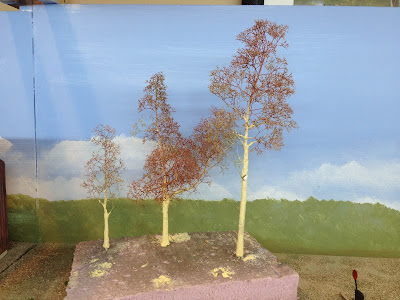 With the engine and layout running well, I moved on to some scenery. I received another batch of trees from Sterling Models for my home layout. That inspired me to make the last trees needed for the road show. Using Super-trees as armatures and wood dowels for trucks I made a batch of trees for the corner behind the turntable.

I used Elmers Wood Putty for bark. That worked very well. I used Marty McGuirk's soldering iron trick to straighten the Super-trees. But I soaked the twig with a spray of Windex ammonia first. This is an old ship modelers' trick (some foreshadowing here?) Ammonia evaporates faster than water and they use it to bend planks.

With all that going on, my spray booth motor started acting up. A quick check revealed it was unbalanced due to a build up of gunk. I was able to disassemble it, clean it and get it back in service. But not before I ordered a new one from Pace. Now, what will I do with two spray booths?


Well, that was a busy week. Oh yeah, I finished the marine ways and steam boat under construction too.