Catering to the Iron Beast: The Never Ending Battle 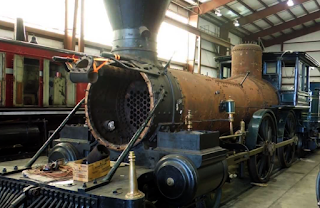 Steam locomotive models, like their real life counterparts, require constant maintenance, care, and the occasional angry word. Case in point - the Aquia Line has 5 locomotives, and only two were running reliably. The two were Fury and Whiton. Both have battery power. Whiton has been the recipient of the new BPS circuity. Prior to that it had problems holding a charge. Since the upgrade it has not lost charge once.

Engine McCallum has DCC and all wheel pick up, but no keep alive. It wheels must be kept clean to run well.

Haupt and Oscela have all wheel pick up and keep alive capacitors. Haupt's keep alive will only hold about 4-6 seconds of charge. Lately it started stalling in several places. I decided to clean the wheels. At that point I noticed, that the all-wheel pickups I had installed on the tender trucks had worked loose. They were no longer making good contact. I fixed those and did a thorough wheel cleaning with acetone. After that, Haupt ran without a problem for 30 minutes straight.

Osceola mysteriously stopped running a few weeks ago. It would make sound and would move about one revolution in each direction before stopping. I carefully inspected it but could not find a problem. Given that the sound was fine and it did move a bit, I figured there was something jamming it. I resigned myself to send it out for another set of eyes to look at it. But, this afternoon we had some guests. When I fired up the layout to demonstrate it, I noticed that one of the throttles on the Easy DCC control panel was set to 007, the number for Osceola. (That system comes with two fixed-in-place throttles.)  I reset that to zero and tested Osceola. Sure enough, it worked just fine. DCC systems generally cannot handle two throttles controlling one decoder. A simple, seemingly inexplicable glitch like this is more evidence that, "to err is human, but it takes DCC to really foul things up."

While running it I noticed that it shorted briefly as it crossed turnout frogs, but it kept powering through. A quick look underneath revealed that a wire to the pilot truck pick-up had broken. It was dragging and causing the intermittent short.

That was a simple fix and now Osceola is running perfectly. Its only drawback is that it has little tractive effort. About 3 or 4 cars is all I can expect it to haul around my layout. Thus, this engine will be used as the reserve engine kept in steam for use of the commanding General. So it will run as an extra when General Hooker  or his staff needs a ride to and from Aquia Landing. I found a message in the archives (or maybe it was Haupt's book) that mentioned this requirement.

I also discovered that two of the frog juicers on a hex-frog juicer circuit card were not working properly. I had to cut the  wire to those frogs to get the circuit to function properly. I also noticed that if I touch the card and slightly move it, the circuit acts erratically.  At one point the card got really hot and made a slight burnt smell, but it still seems to function.

The bottom line is that now I have 4 engines that run very reliably and one, McCallum, that is a bit prone to stalls.  I am looking into adding a keep alive to McCallum to help it run more reliably.

The guests today were John Drye, Jake Brendel and his girlfriend Alex Connole. After a home made lasagna dinner courtesy of my mom, they had a chance to run the layout. This was the first model RR the Alex saw. She told Jake that she thought the civil war layout was really cool. Jake however, seemed to prefer PoLA, though he liked the unique aspect of Aquia.

This past weekend I was at the NMRA MER annual convention in Harrisburg. I delivered 4 clinics over the weekend, went to an op session at Brian Wolfe's layout, and visited 3 other layouts. I also attended several other clinics including one by Ed Kapuscinski on his NCR N scale layout, and 2 clinics by Lee Rainey, a long time member of the the ACWRRHS. I had known Lee several years on the ACWRRHS forum,  but this was the first time we ever met. Lee models the East Broad Top and PRR in Mt Union in S scale.

I entered the Conductor's Car model in the model contest. It won first place in the caboose category.

Also in the model room was a G Scale train by Dennis Lenz that featured a Hartland 4-4-0 pulling  6 cars, 5 were USMRR flats with a Union Artillery battery, and forge, while the sixth was a  combination freight car (the latter was lettered for the Manassass Gap RR). 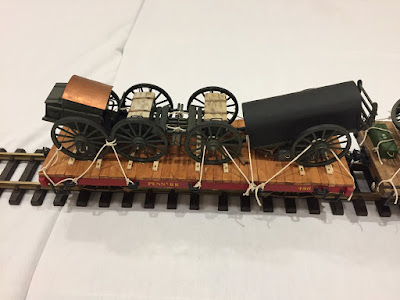