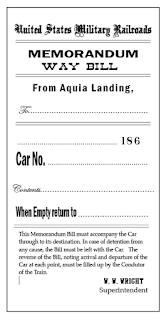 I found a memorandum waybill form used by the New Haven RR (at the left)  in the 1870s that might fit the bill (pun intended) for paperwork on the O scale Aquia Line. On the right is a version of the form adapted for my model railroad. This concept will get rid of the tokens that we used heretofore during op sessions.

My objective is to have no more than one piece of paper per car. So, each car will start the session with a memorandum waybill (called bill from now on). The bill will list the contents and destination of the car. The conductors will examine the bills at their starting station and build their outbound train. They will add cars, up to 6 per train including caboose,  to their switch list, and take the bills with them clipping it to the board.

As trains progress across the layout, if they find a car at a trailing point siding, they will flip a coin for each car. If the coin is heads, that car is still loaded and they leave it where it is. If the coin turns up tails, the car is now empty. The conductors will add that car(s), up to their 6 cars per train including caboose limit,  to their switch list, and take the bill with them clipping it to the board. They would also remove loads from flat cars and place them on the siding. If the train has no scheduled meets, it may take more than 6 cars. When they spot the car, they leave the bill in the appropriate box.

At Falmouth, the random process is the same, though some trains originate at Falmouth. The conductors will examine the waybills of the cars that were there when they arrived. They will do the coin flip process for each to determine which ones are empty and ready to return to Aquia Landing. Yes, it is conceivable that a train will return with no cars, and that did happen on the prototype too.
If Falmouth gets too crowded due to random chance, the superintendent can send an extra to help pull cars.

Occasionally, a car will move from one station to another. I can handle that situation with a new bill and a message to a crew.

When trains get to Aquia Landing, they will spot the cars according the "When Empty return to" directions on the bill. They will insert the bill into the box at Aquia Landing.  The car is automatically restaged. I can swap the bill with a different one for variety if desired.  Essentially this is a two-cycle way bill system. 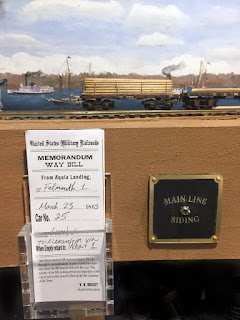 After a train is terminated at Aquia Landing, the freight agent at Aquia Landing (that would be me) will check the bills and add loads to the cars as indicated by the bills. If I desire, I replace the bill a new bill with new contents and destinations. For example, add a mail load to a car that just hauled forage.

This system gets rid of the unsightly tokens and uses paperwork that appears to be quite realistic, even if it is a bit freelanced.  The visual impact of the boxes on the fascia is minimal as I will use clear acrylic to make them. Since the paperwork looks somewhat prototypical, it actually adds to the realism of the layout. It may also spark questions from non-model railroaders, giving me a chance to explain operations.