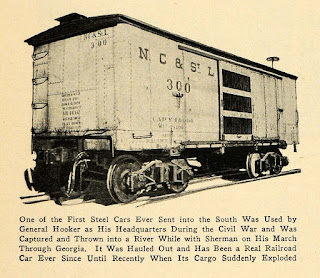 I found this image on an auction site by chance while doing a google image search. I have never seen or heard about this car before. Nor have I been able to find any additional information on it.

In the photo one can see the airbrakes hose, modern stenciling, a road name that didn't exist until 1870's, and a knuckle coupler. Thus we know that this is not a photo from the civil war. But, is the caption correct in that this was a civil war era car that had been salvaged from a river and then upgraded?

The consensus on the ACWRRHS forum is that the caption is not accurate. The car is listed on the 1890 OER, meaning that it would have been about 26 years old if it was a ACW era car. It is also unlikely to be steel, as steel was relatively rare until the 1866 time period when the Bessemer process started to be introduced into the United States.  Hooker was in Georgia with Sherman in 1864 until he was relieved. If anything the sides are sheets of iron, copper or tin.