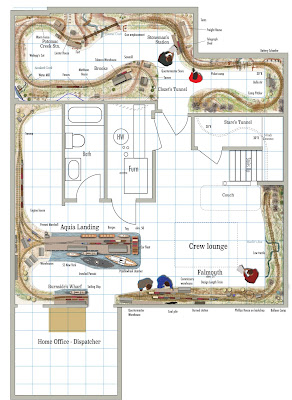 After several months of delay due to floods, hip surgery, and my mom's passing, I finally started Phase 2 of the expansion of the Aquia Line. Over the past few days I have been installing the benchwork for the new section. I decided to go with less ambitious plan of adding just Falmouth and not modifying Aquia Landing. This will allow me to get the railroad back in operation sooner. It leaves open the possibility of expanding the railroad later if I still feel the urge to build. I needed to reprioritize the timeline of the expansion over other projects, such as the locomotive build, as I have a dead line for an article coming up and I need to have some of this expansion done. 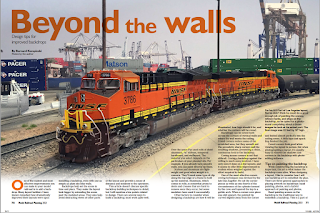 Speaking of articles, please check out my latest piece in Model Railroad Planning 2021. In that article I discuss some ideas to designing backdrops for model railroads. 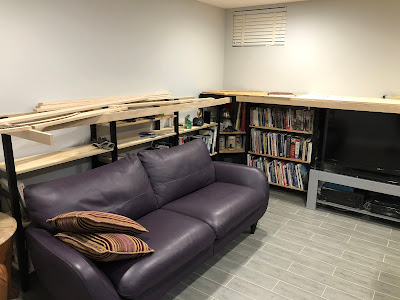 Back to the expansion, as you can see in the photos, the benchwork is very similar to what I built for the POLA layout. I ended up using only 12-inch deep Ikea IVAR shelves  under the layout as opposed to the deeper 19-inch ones I had under parts of POLA. 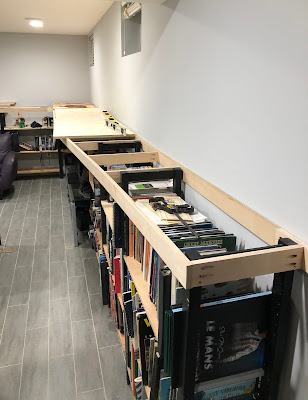 The second photo shows the expanded area available for new location for Falmouth. This new area is about double the length and wider than the old Falmouth. I wanted the area above the TV to be deep enough so that my operators would not bang their legs against the glass shelf of the TV stand below the benchwork. The wider layout space space also gives me more room for structures and scenery at Falmouth.

One of my main concerns was the grade of the track coming out from under the stair landing. At a minimum, the tracks need to climb up to the top of the IVAR shelves. That requires an elevation gain of about 1 inch over 13 feet, less than one percent, to an elevation of 49 inches.

I wondered if I should make the height of the track at Falmouth the same as at Burnside Landing, which is 51 inches. The only reasons to do that are, first,  if I wanted to make a continuous run, which I don't, the tracks needed to be at the same level. The second reason is more subtle and relates to the prototype geography. The track at Falmouth should be higher than the track at Aquia Landing since Aquia Landing is at river level and Falmouth is higher on the ridge.  But, if I placed Falmouth 51 or higher inches, it would require climbing at least another 2 inches, resulting in about a 2.5% grade coming out of the closet. I was concerned that my engines would not be able to pull the design length trains up that grade.  So I opted to minimize the grade. Thus Falmouth will be about 2 inches lower than Brunside's Wharf and Aquia Landing.  The difference is hard to detect when you are standing at the layout.  We will have to chalk up this discontinuity in space-time continuum to the effects of traveling under a stair landing. Perhaps we can blame Harry Potter.I am also reconsidering the scenic treatment of the section behind the couch. I designed a long low trestle in that spot. But I now think I would be better off breaking up that stretch of track into two discrete scenes. I think that might make the distance traveled seem longer if one can not see the whole train at one time.

So I am looking at some combinations of bridges, cuts and fills in this area. Also, because of the book shelves under the layout, I don't have a lot of depth to exploit. One idea that appeals to me is to install a through truss bridge over a creek in this area (see photo below) . I built one several years ago for the road show layout, but Gerry has that now. I still have the laser drawings for it, so making another one would not be hard. That kind of bridge looks good in a low clearance application. 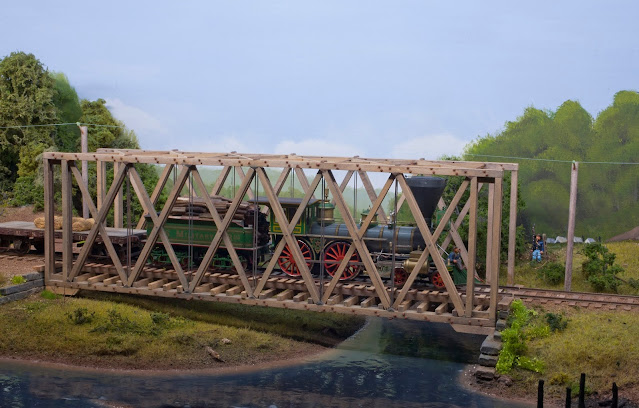 Today I presented a talk to the Osher Lifelong Learning Institute at American University about railroads of the Civil War. The talk seemed to have been well received. We have tentatively scheduled an open house so the OLLI members can visit my railroad and perhaps some other civil war sites in Alexandria.