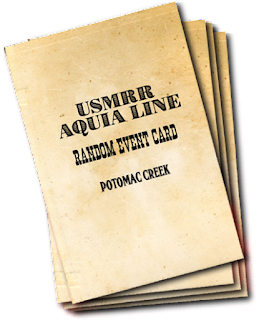 I want to add a new feature to my op sessions when we start running the Aquia Line again after this latest construction and COVID is under control. This feature will be pre-scripted events that will occur at random during the session. My intent is to add a bit more period flavor to my op sessions.

I haven't figured out how exactly I will implement it yet, but the general idea is to have an event like the ones listed below happen at various points during a session.  Right now I am thinking, I will have a series of cards. Each card will have a random event. The cards will be propositioned at various locations in boxes around the layout. That way events can be tailored to a location. As the crew passes the random event box they must draw a card and react as the event dictates.

Often the card will be "No Event" so they continue on their way. But if they do draw a random event, then they have to follow what the card says. The mix of cards will be tailored for the location. So not all events will have the same likelihood of occurring. The events will be distributed in each box with many  "No event" cards so that actionable random events will be somewhat rare. This will avoid them becoming too cliche. 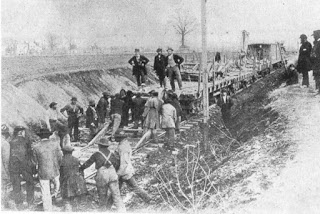 Here are some random events I have come up with so far. They are based on actual incidents from the Civil War or other period railroading.  If you have any ideas for additional events, please comment below or drop me an email. I prefer events that are based on historical incidents. They should be minor and not catastrophic, i.e. no low water causes your boiler to explode, or rebel raiders capture your train. I won't have any events that caused derailments as we have enough of those on our own.  The events could also just be for color and have no effect on the operation.

RANDOM EVENTS FOR THE AQUIA LINE