The Inmates Are Running the DCC Asylum 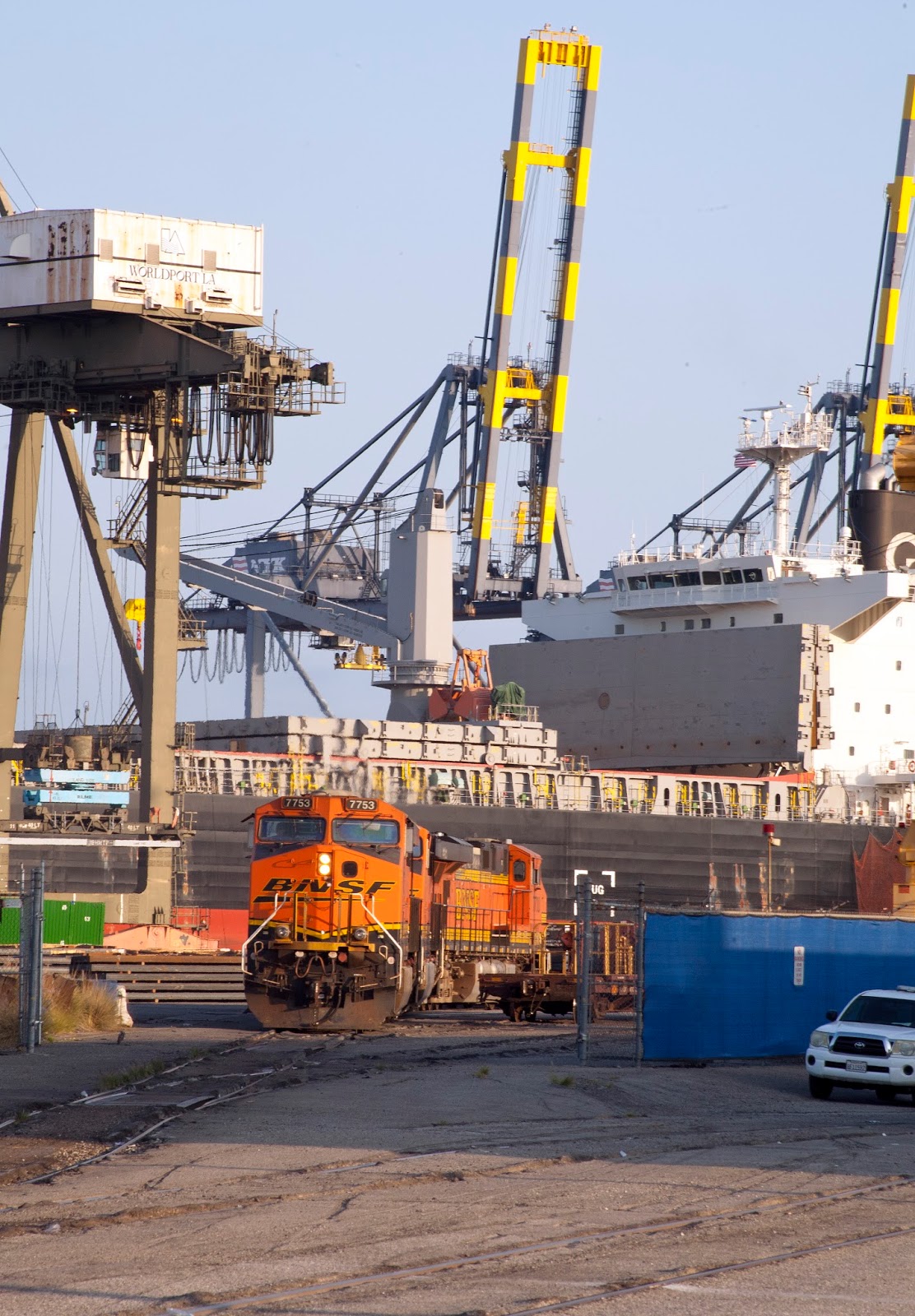 Anyone that reads this blog knows that I have a love-hate relationship with DCC.  This week the DCC relationship needle is swinging toward the hate side.  Here is why.

The prototype photo at the left shows the scene that inspired the PoLA layout. I wanted a layout that featured heavy duty, six-axle locos switching freight cars on wharves alongside massive modern ships and cranes.

For the Waterfront Terminals and Operations book I borrowed some of Ramon Rhodes's BNSF 6-axle diesels to use as photo props on this layout. Thanks Ramon, those were very helpful, but I always planned to get some large BNSF power myself to operate on the layout. Thanks to Matt Gaudynski at Fox Valley Models, I did get some BNSF GP60s for the book.  But those were 4-axle locos and the GP-60M is probably not correct for Los Angeles, though the GP-60s did frequent PoLA.

So over the past few weeks I have purchased some new HO scale 6-axle locos. The first was a  BNSF Gevo Tier 4 from Scale Trains in the Rivet Counter spec. It has a Loksound V4 Select decoder. I got it via a Facebook sale, as they were out of stock by the time I looked into getting one. The model arrived and I put it on the track. It looks fantastic, runs beautifully and sounds great, although way too loud. My wife could hear it up stairs. The decoder in this loco has a keep alive circuit, which is a nice touch.

A short while later, I received an Athearn ES44DC from Mainline Hobby Supply (a fantastic shop with great service) that I had advanced ordered a few months ago.  It has a Soundtrax Tsunami decoder. It also looks fantastic, runs great and sounds realistic, although also too loud.

So now I am finally able to recreate the scene that inspired the layout. Well, maybe, as long as I don't try to run locos together.  The locos have different speed characteristics and the function buttons control different functions. Some of the functions on one are not available on the other.  So it's time to reprogram. No problem I've done this in the past using my EasyDCC. I'll just program new addresses, remap the functions and consist them together.

Like all DCC locos with decoders, these come programmed to address 3. It's a simple matter to reprogram the address, right? Just put it on the programmer track and push a few buttons. Nope, for some reason my programming track would not work, even though I purchased a Sountraxx programming booster for it. Not just for the new locos, but I also tested some of my others, where it previously worked, and now it didn't. I checked the wiring and power. All seemed OK. I cleaned the track and checked the solder joints. All were OK, but still no programming track capability.  Fraking DCC.

With the programming track inoperative, I looked to Ops Mode programming. It worked, but you really can't change loco addresses in Ops Mode  (it is feasible but a pain in the petunias). Also, remapping functions with Easy DCC in Ops Mode is an exercise in hexadecimal hell. Consisting is somewhat easier, until you try to customize the function buttons. Then you're back in hexadecimal hell. Fraking DCC. 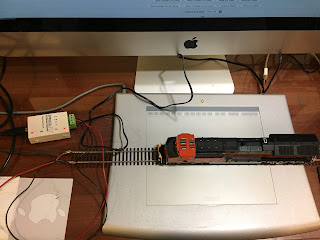 Being unable to figure out what was wrong with my EasyDCC programming track and dreading the hexadecimal torture that is Ops Mode programming on EasyDCC, I looked for options. After a few hours of internet searching, the best shot seemed to be JMRI Decoder Pro. I was able to download Decoder Pro and it worked on my iMac.

So I ordered a SPROGII v4 from Mountain SubDivision Hobbies to create an independent programming track. It arrived a few days later.  I went with a SPROG II as I didn't want to try to interface with my EasyDCC system with a serial to USB adapter cable since I was having trouble with the EasyDCC programming track. Also, my computer is not in the same room as my layout and my laptop is too old for the latest versions of JMRI. OK, I admit I have extra computers laying around the house, but they are all old and I didn't want to go through updating them all.

Did you notice how this is evolving into a discussion of computers and software and not model trains. This is part of the hate side of the DCC relationship.  I get enough of computers at work and just about everywhere else. When I play with my trains, I want to play with my trains. I don't want to use computer software, update drivers, look for USB ports, attach serial buses, and check Java versions.

The SPROGII v4 comes with Mac OS X USB drivers installed, so setting it up was fairly simple. The manual is a hundred pages long. A quick scan shows hundreds, maybe thousands, of possible options. Lets look at that later. I'll just follow the quick set-up.  I put the Athearn ES44DC on the track and asked it to create a new loco in Decoder Pro. After about 5 minutes, the software said, "No decoder detected. Error 301." I had to google that.  It is either a bad decoder, bad wiring (it's two wires for cripe's sakes), or dirty track.  OK,  check all and try again.  Still no luck. After a few more tries, including making sure the loco still worked on the layout, I resorted to the classic debugging technique. I rebooted the Mac and SPROGII.

Still no luck, error 301. OK, maybe it's the decoder. Lets try another loco. I put the Gevo Tier 4 on. Whoa, wait a minute - DecoderPro worked. I was able to change the address. Lets test it. Back on the layout, I can't get the loco to respond with the 4-digit address, but it will work with the 2-digit address. Fraking DCC.

Fine, 2 digits it is. Now, maybe I can remap the Loksound functions to match the Soundtraxx decoder using Decoder Pro. Hmm, that's not working either. Lets download the Loksound manual. Over one hundred pages later of electrical engineer gibberish with a slightly Germanic twist (BTW I am a big fan of German technology as I drive a Porsche and have a bunch of Festools, but you have to admit they have a certain way of describing technical things. Alles ist Ganz Ordnung, Ja? I supposed it could be worse, as it is not translated from Chinese or Japanese) I find out that function mapping for LokSound V4 Select decoders is not really compatible with Decoder Pro. Loksound recommends you get their programmer device. That costs $120 and you need a Windoze 10 computer. So add another couple hundred to the price as I am a Mac user.   Oh well, I guess I'll live with the functions as mapped.

Fortunately, when the locos are consisted you can disable certain functions. But even with Decoder Pro this is a trial and error procedure as the effects of disabling a function don't work the same on each loco. Fraking DCC.

So, where am I now? I have been able to get both locos programmed to new 2-digit address. I don't know why the 4 digit addresses didn't work. I was able to get them consisted. The lights work almost as intended, but still not the way I want. I won't bore you with those details. Fraking DCC.

I was able to lower the sound volumes using Decoder Pro. OK, now the big challenge, can I get them to run at the same speeds. After about a hour of tweaking in Decoder Pro and testing on the track the answer is no, but they might good enough. Fraking DCC.

One of the things I like to do when switching is to use the brakes. Because I haven't been able to figure out function mapping, this consist will operate without the brake function. Fraking DCC.

Finally, one bit of good news. My PHL66 SD40 , an Athearn model with a Wow sound decoder and keep alive, was acting up. I sent the decoder back to the manufacturer and they said it checked out. But it still acted funny when I reinstalled it in the loco. By funny I mean the sound was dropping out and the throttle  was losing control. Fraking DCC.

I put the loco on the SPROGII programming track and used Decoder Pro to do a decoder reset. That seems to have fixed that problem. Now, I need to reassemble the loco and reattach the lights. However, I am considering swapping the decoder for a Tsumani. That will simplify things as it will mean I have two and opposed to three types of decoders no the layout, as I only have one TCS Wowsound decoder.

In conclusion, I think the DCC sound manufacturers in their arms race to "out feature" each other have gone too far. In an effort to make their locos sound and act more realistic we have lost simplicity and ability to work interchangeably. When I play with my trains, I want to play with my trains.

I walk every day along the former RF&P main line to get to metro. I often hear trains coming. I try to guess what they are and how many units. I can never get it right. To me they all sound the same. So all this effort to get exact prime movers, air compressor sounds, etc. is lost on me.

Let's be honest, it's basically industrial noise. Most of my visitors, operators, and wife prefer the DCC sounds system be at a low volume anyway. DCC sound is trying to attain sound fidelity well past the point of diminishing returns. Now, they are making things worse.

I hope the DCC manufacturers take a step back from their oscilloscopes and EPROMs and take a look at what model railroaders want. And don't just look at it from your own stovepipe system. They need to consider the whole technology ecosystem of operating model railroads. A ecosystem where old and new components from different manufacturers have to work together. That was supposed to be the NMRA's job, but right now I'd say they failed. So now we have the inmates running the DCC asylum.

My wife asked me if I felt better by writing this "rant."

I replied, "yes, because it was nice to know I wasn't the only one having these issues."

Anyway, having thought about it, I decided to throw good money after bad, and I ordered a second Scale Trains Gevo to run as a matched set. These locos are just too nice and smooth running to not use on the layout. The cost of a second loco with the factory decoder was less than trying to get a laptop and proprietary programmer.  The Decoder Pro software  can handle most of the functions I need except for remapping.

Now, I need to decide if I will sell the Athearn ES44DC or keep it and  get a matching unit for it too. One can never have too many locos, right?