The Joys of Wiring


We finished wiring the layout today with frog juicers, feeders and the auto-reverse on the turntable. 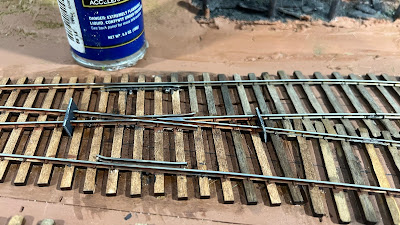 Amby spent the afternoon installing 4 frog juicers. The task was a little more complicated than usual since the rails on the frogs on my hand-laid turnouts are not all electrically connected. The easiest way to connect them is to solder a jumper across all the rails and then use the extension of that wire as the feeder wire  to the frog.  See the yellow circle the photo to see the jumper under the frog rails.  That jumper is part of the wire to the frog juicer. 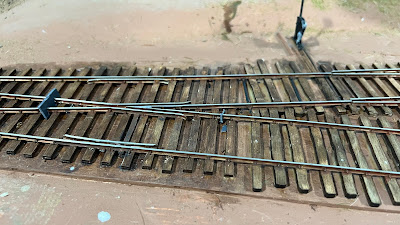 The red circle show how I use pieces of dark gray styrene to seal the gaps in the rails so that the will not close and cause shorts or other electrical problems.

While Amby was working on the frogs, I put a base layer of scenery on the Stares Tunnel section. 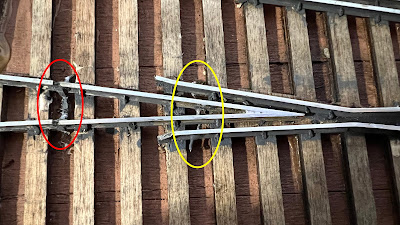 After dinner, I finished wiring the last frog juicer. Then I filled all the gaps with styrene and filed them smooth to the rail.  I also added jumpers from the all the stock rails to the closure rails.

The last under table wiring task was to connect the auto reverse circuit on the turntable. That worked as soon as I hooked it up. That was a pleasant surprise.

Amby and I did some test running. If you want to find track problems, run one of the Masons. Sure enough Haupt was derailing when backing over the south abutment. After a lot of gauge checking and test running I determined that rear rail by the abutment had a dip. I was able to fix it by levering the rail up a few thousands with a  small screwdriver. It now works without problems.

I ran Haupt and Osceola up and down the tracks to test  the track, gaps and feeders. and all seemed to be working pretty well.  The wiring is done, but I still need to paint and ballast the track. I also need to do some tidying up of the wires under the layout so that they do not interfere with removing the books.

Doing scenery and backdrops and all the other work is fun, but when the trains move across the layout it really comes to life.