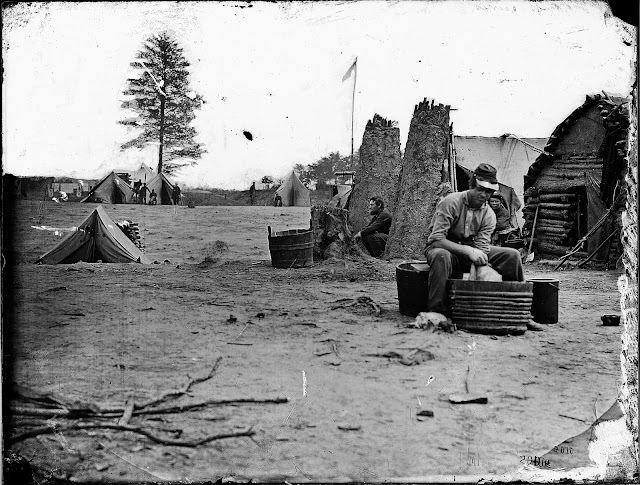 It is always a treat to find a new picture of the Aquia Line. That happened tonight as I was surfing the National Archive Website of Matthew Brady photos. and came across this photo. I was examining the picture when it occurred to me that the tree in this photo was very similar to the "famous" lone pine tree in the well know picture of an infantry company at Falmouth as shown below. 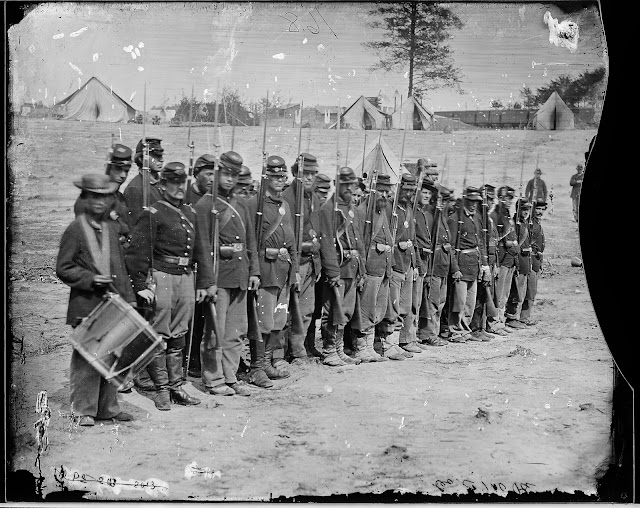 The caption of the second  photo clearly states it is at Falmouth and we can see a line of box cars in the background. If you compare the lone pine and the tents in front in the two photos, you can verify that the location is the same.  So the second photo is also at Falmouth.

The second photo gives me some additional ideas for detailing my Falmouth scene. I have no idea what the two mud columns are for but it will be fun to model them. The soldier doing his laundry is also a fun detail.

There is a bit of controversy on the identity of the unit in the second photo. The National Archives caption says the infantry company is from the 6th Maine. The 6th Maine was stationed at Falmouth at the time in question. However, others say it was 110th Pennsylvania. Thanks to General Hooker and his corps badges, we can trace this unit to the III Corps, as their badge was a diamond. You can see the diamond badge on the kepis of most of the soldiers in the photo.  The 110th PA was assigned to  2nd Brigade, 3rd Division, III Corps, Army of the Potomac, from Sept 1862 to  June 1863.  The 6th Maine Infantry was assigned to the Light Division, VI Army Corps from January 1863- to the end of the war. The  VI Corps badge was a cross. So we know this is a III Corps unit, probably the 110th PA as there were other photos taken of that unit around that time.