I tried some new techniques over the past two days on the backdrop and trees. 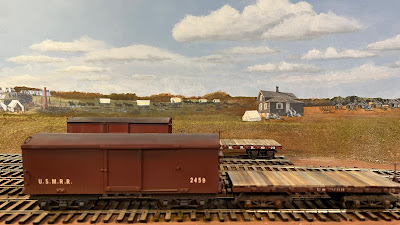 The first was to create a new backdrop scene from photos I took at the Pamplin Civil War Museum last year. For example the house in the picture above came from a picture I took. I added some of Brian Kammerer's figures that he provided me a few years back. To make the photo of the house match my existing backdrops, I had to make it look painted. So I used Photoshop to do that using the Oil Paint filter and the then a Poster Edge filter that had been reduced to just the outlines.The photo at the right shows it on the backdrop.
I made a second camp scene from another image I took at the museum. In this one I started with a distant image of the simulated camp at Pamplin now used as a summer camp for kids. Then I composited other images from Pamplin along with more of Brian's figures to create a long  backdrop image. I then printed it in sections and applied it to the wall. 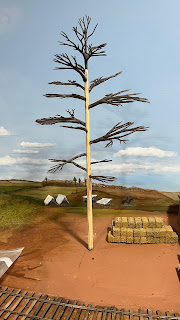 Secondly,  I tried to make a model of the lone pine tree at Falmouth. I used a piece of pine carved to look like a trunk. Then I added plastic armatures from Woodland Scenics. I had to trim and modify them to look more like a  pine tree branches. I painted it with brown and dark gray and then used Superturf from Scenic Express to add the foliage. The tree looks better in person than the photo, but I am not that happy with it. It is disappointing as it took several hours to make it.  It will do for now while I come up with something better.
Finally I added some simple trees behind the engine terminal at Falmouth. 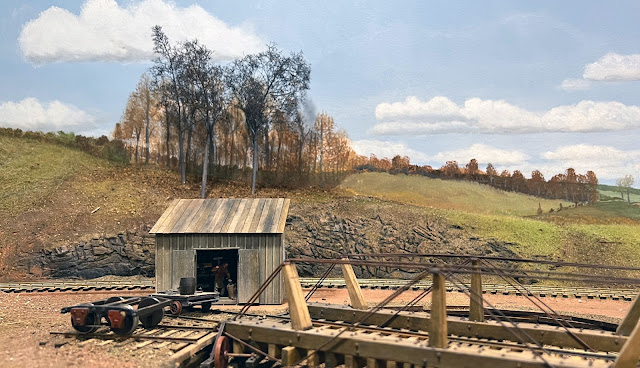