My brother, Rob, and I attended the National Capitol Model Soldier Society Show today. This was the annual show for  the NCMSS. It's more than just model soldiers as they have entries in Sci Fi, Fantasy, Gundam, Dioramas categories in addition to historical model soldiers. Also attending as exhibitors were NVNTRAK with their TTrak layout, the Armor Modeling Society, IPMS, and the Washington Ship Modelers. There were also several vendors selling models, supplies and books.

I was judge for the historical painters category. There were a lot of wonderful figures.

All in all it was a very successful one day show. About 52 people entered models for judging with about 260 models being displayed. It was a fun time.

My brother picked up silver medals for his historical and fantasy figures.

I also received silver medals for historical and fantasy figures that I entered.  The busts that I painted were very enjoyable projects. I especially enjoyed painting the faux marble on the base of the Corinthian Hoplite.  I received a lot of comments on the helm that he was wearing and how I achieved the metallic finish. I stared with an airbrushed layer of AK Extreme Metallic paint. Then I brushed on some black and bronze acrylic to shade it. A final layer of AK True Metal  metallic paint added the metallic luster. This a wax based paint that you apply with a cotton swab and then buff with a rag. It really looks like metal when applied on top of a metallic base Our joint project, Star Power,  also received the Victory in Europe award for the figure, diorama or display that best celebrates the allied victory in Europe in World War II. That award came with a very nice 120mm figure vignette of US soldiers at D-Day by Jeffshiu's Miniatures. Rob volunteered to build that. 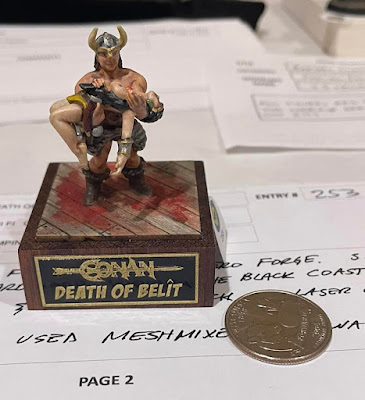 I was surprised to learn that a small 28mm vignette I made received a silver medal. It was a model of Conan holding the dead body of Belit, his lover and fellow pirate. It was based on the original story by R. E. Howard called "Queen of the Black Coast."  I designed the figures using a website called Hero Forge. I used Meshmixer to combine the figures.  While Hero Forge is an interesting way to sculpt a 3D figure, I really want to learn a better way to sculpt figures for 3D printing.